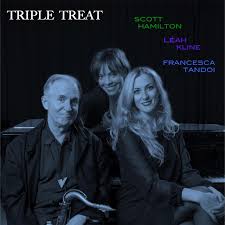 The unique trio of Scott Hamilton, Léah Kline and Francesca Tandoi prove to be a very complete group filled with musical bravery and talent, giving listeners a true Triple Treat.

The great tenor-saxophonist Scott Hamilton, whose arrival on the scene in the mid-1970s launched the comeback of small-group swing, has recorded scores of albums in his career. However until Triple Treat, he had never been on a recording date where he was one of just two instrumentalists and part of a trio with a singer.

When one thinks of a piano trio, an ensemble consisting of piano, tenor and voice does not immediately come to mind, but this concept works extremely well with these three artists. Francesca Tandoi is perfect for the piano slot. She was born in Rome, is based in the Netherlands, and has performed all over the world. Her swinging solos and superior skills as an accompanist are very much in evidence throughout this intimate set. Léah Kline, an American who moved to the Netherlands in 2000, is a versatile singer with a beautiful voice. She has excelled in settings ranging from swing to cabaret, from straight-ahead jazz and musicals to her own original material.

TRIPLE TREAT came together through its co-producer Jerry Steyger, the Benelux manager of Scott Hamilton who came up with the inspired idea of teaming together the three artists. After the singer and the pianist picked a particularly inspired repertoire, the trio had a single rehearsal and recorded the entire CD in one day in the studio. The spontaneous results are filled with magical moments.

It is obvious from the first chorus of “Easy To Love,” that this is not merely a “singer with band” recording but very much a musical democracy with close interplay between the three artists. Leah Kline is flawless in her treatment of Kurt Elling’s vocalese lyrics on “He’s Funny That Way,” taking a hornlike solo while Scott Hamilton “sings” the melody on his tenor. The music is both intimate and swinging on Blossom Dearie’s always-delightful “Little Jazz Bird,” “Blame It On My Youth” (which has Leah taking the verse unaccompanied) and “Early Autumn.”

Francesca’s arrangement of “Four Brothers” is quite exciting and highlighted by a hair-raising tradeoff at its climax. “Star Eyes” is taken as a jazz waltz. Charlie Haden’s haunting “First Song” (his finest composition) has some beautiful wordless singing. An uptempo “Get Out Of Town” and Léah’s slow and thoughtful ballad “Light At Heart” precede a surprise, a version of “But Not For Me” that has both Francesca (in her only vocal of the set) and Léah uplifting the Gershwin song with their singing.

The unique trio of Scott Hamilton, Léah Kline and Francesca Tandoi prove to be a very complete group filled with musical bravery and talent, giving listeners a true Triple Treat.

~Scott Yanow, jazz journalist/historian
and the author of 11 books including Swing, The Jazz Singers, Jazz On Film and Jazz On Record 1917-76

Send me an email
Newsletter ?

Get the Latest News!!